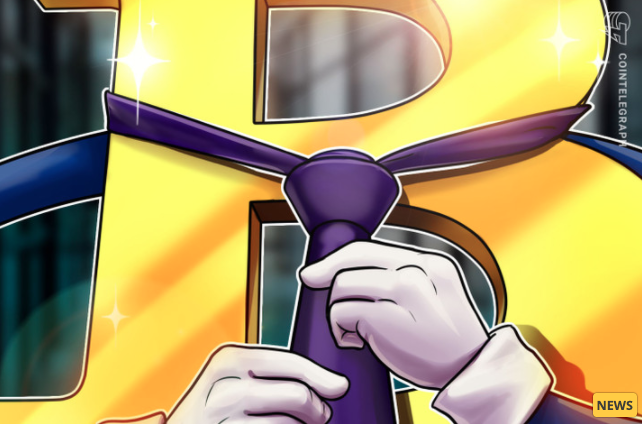 The bill introduced by the president of El Salvador to make Bitcoin (BTC) legal tender in the nation passed the Legislative Assembly with a supermajority just before 6:00 am UTC.

In a Twitter Spaces conversation with 22,000 listeners that began just after 5:00 am UTC, President Nayib Bukele said he would sign off on the historic law later that night or first thing the next day.

“It goes into effect immediately,” he said, clarifying the government would allow 90 days for the infrastructure to be put into place. 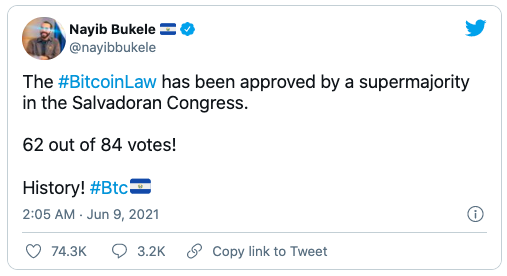 He said that accepting Bitcoin would be mandatory for all businesses. “They have to take it by law,” he said of merchants in the country. “If you go to Mexico, they have to take your pesos.”

“In the case of El Salvador, Bitcoin is going to be legal tender just as the U.S. dollar.”

He revealed that he will be meeting with the International Monetary Fund on Thursday. The government will also be releasing an official Bitcoin wallet, although it will not be mandatory. The government intends to hold $150 million worth of Bitcoin in a trust fund in its development bank to assume merchant risks.

Permanent residency will be available for those who invest 3 BTC in El Salvador. Asked if the country would put Bitcoin in its reserve, he said there were no immediate plans:

“I don’t know — this is evolving very fast. We’re not ruling out having Bitcoin in our reserves in the near future.”

The president said he hadn’t thought about Bitcoin mining but was favorably disposed toward the idea of renewable energy-based Bitcoin mining.

The “Bitcoin Law” took the form of a bill submitted on Wednesday after Bukele tweeted, “I’ve just sent the #BitcoinLaw to Congress,” and uploaded copies of the bill in Spanish and English. 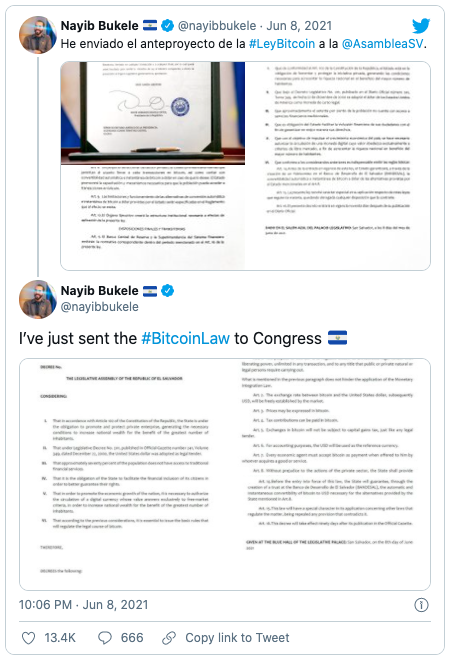 “The purpose of this law is to regulate Bitcoin as unrestricted legal tender with liberating power, unlimited in any transaction, and to any title that public or private natural or legal persons require carrying out,” the bill reads.

The bill includes a list of interesting proposals such as zero capital gains tax on BTC, allowing tax payments in BTC, and that economic agents “must” accept BTC as payment when offered by “whoever acquires a good or service.” 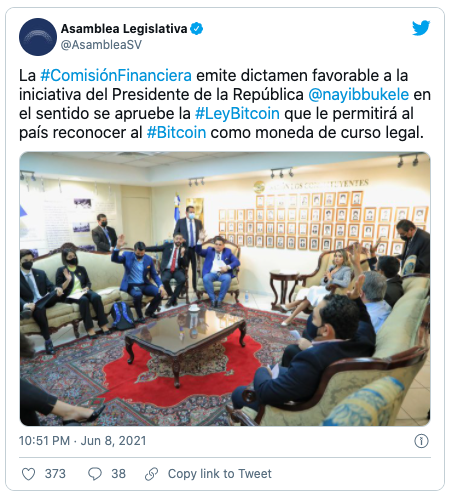 Interestingly, following Bukele’s latest announcement, he changed his Twitter profile picture to one that features blue laser eyes, as opposed to the red ones usually found with the iconic crypto meme. 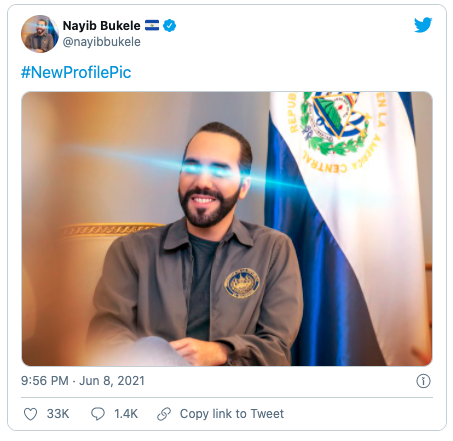 Bukele’s progressive crypto move has sparked enthusiasm among a number of politicians throughout Latin America who have either touted crypto proposals of their own or donned red laser eyes in support of crypto.

On Monday, Paraguayan congressmember Carlitos Rejala posted a photo with laser eyes and promised a Bitcoin-related announcement later this week. 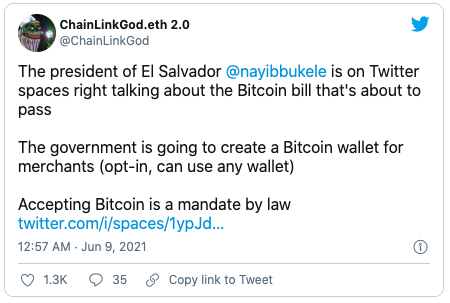 Original article posted on the CoinTelegraph.com site, by Brian Quarmby.