Over the past few days, Bitcoin (BTC) has stopped dead in its tracks. After rallying from a multi-week low of $7,450 to briefly flirt with $9,400, the cryptocurrency stopped its upward momentum. Since then, BTC has been rather flat, trading between $9,000 and $9,300. But, one analyst claims that the asset is poised to break out — upward that is. In a recent tweet, he laid out his thoughts.

As seen below, the analyst, Smart Contracter, who correctly called that Bitcoin was going to bottom around $3,500 at the start/middle of 2018, believes that BTC is soon poised to hit $10,000 for the first time since early-2018.

He claimed that BTC is currently trading in a triangle pattern, marked by an increasingly tighter range. With there being dropping volume, a break out is becoming increasingly likely. Per Smart Contracter’s use of wave analysis, this breakout will bring Bitcoin to $10,000. As he claims, “I think its only a matter of time now before we break up again.” 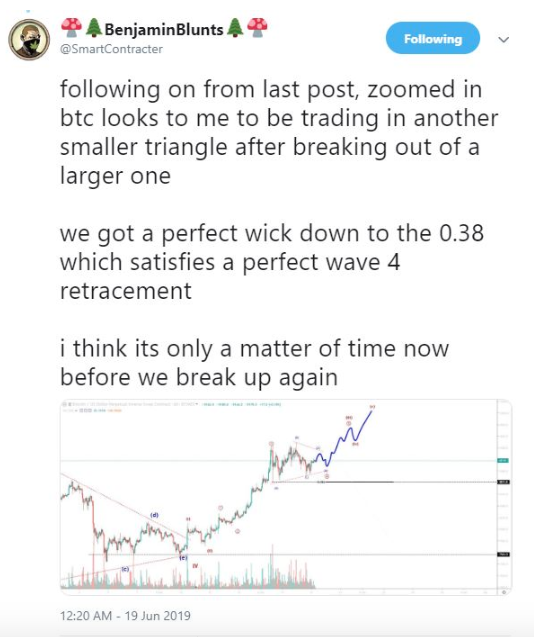 He isn’t the first to have claimed that $10,000 is inbound. In Tuesday’s segment of CNBC “Futures Now”, the two guest traders and Fundstrat’s Tom Lee claimed that they are currently bullish on cryptocurrency. One of the traders claimed that as long as BTC holds $9,100, he would be inclined to believe that Bitcoin can soon reach $10,200.

This comes briefly after Lee and his peers at Fundstrat claimed that $10,000 is the level to watch for Bitcoin. They claim that once Bitcoin reaches $10,000, “Level 10” FOMO will grace this market, which last occurred when BTC blipped above $4,500 in late-2017. If history is any guide, the cryptocurrency market will shoot even higher once $10,000 is breached. As the analyst wrote on Twitter earlier this month, “[$10,000] will see FOMO from those who gloated about the 90% crash in BTC… and those who saw Bitcoin dead as forever.”

The crypto community also seems to convinced that a further rally is only a matter of time. According to recent sentiment analysis compiled by analytics startup The TIE, there were 38,889 Bitcoin-related tweets yesterday — the highest daily count in June so far. 61.4% of tweets mentioning both Bitcoin and Libra were purportedly positive, marking overall bullish sentiment.

What’s more, overall crypto community sentiment is at its highest since May 15th, which was when BTC first started to move past $8,000 in this cycle. The TIE writes: “Despite a 2.5% drop in the price of Bitcoin it appears that the markets response to Facebook’s Libra release has been strongly positive.”