The Bitcoin rally is still at an early stage, according to one key metric, despite the overnight pullback. 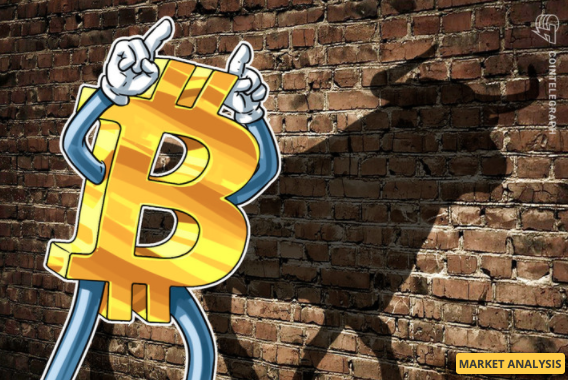 The price of Bitcoin (BTC) saw a minor correction on the day as the global stock market pulled back.

The top cryptocurrency dropped by nearly 8% in the last 24 hours, retracing most of the gains it recorded during yesterday’s rally on March 3.

Bitcoin bull run is still at an early to mid stage

According to William Clemente, a cryptocurrency analyst, Glassnode’s Reserve Risk indicator shows that Bitcoin’s rally is still in the early to middle stage.

As Clemente explains, the Reserve Risk is defined as price/HODL Bank. The indicator is “used to assess the confidence of long-term holders relative to the price of the native coin at any given point in time.”

Hence, if the Reserve Risk is still relatively low compared to previous peaks, it shows that Bitcoin is not at risk of nearing a macro top.

Moreover, despite the weakness in Bitcoin over the past 20 hours, it is performing well considering that the global stock market has seen a significant drop.

Kyle Davies, the co-founder at Three Arrows Capital, noted that global macro sold off, yet Bitcoin has not seen a massive correction as a result. He said:

“You should look for relative strength when others are weak. Global macro sold off yesterday and BTC did not give a donkey.”

Meanwhile, Ki Young Ju, the CEO at CryptoQuant, warned about an uptick in exchange deposits as the price of Bitcoin dropped below $50,000.

When whales deposit Bitcoin into exchanges, it typically indicates an intent to sell. High-net-worth investors often keep their cryptocurrency holdings off exchanges.

“Update: Little uptick on All Exchanges Inflow Mean at 52k price. It might cause a small dip. I’m not sure how far it could drop at this moment.”

The combination of whales possibly selling Bitcoin on exchanges and the gloomy macro landscape likely contributed to the decline in the price of BTC.

In the longer term, however, the outlook remains bullish as the illiquid supply of Bitcoin continues to increase. 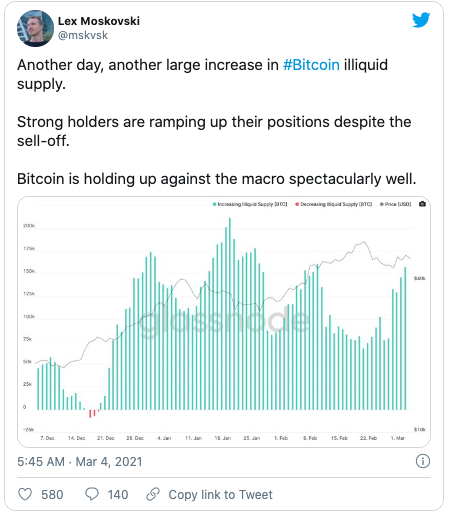 Lex Moskovski, the CEO of Moskovski Capital, also noted that strong holders are ramping up their Bitcoin positions.

As long as strong hands and high-net-worth investors are continuing to accumulate Bitcoin, the bull trend is likely to remain intact.

In addition, the high time frame market structure of Bitcoin remains compelling, as it broke above the $46,000 level, establishing it as new technical support.

Original article posted on the CoinTelegraph.com site, by Joseph Young.