Bitcoin Price Tanks Below $9,000; What Comes Next?

The volatility that analysts expect in the Bitcoin (BTC) markets is finally here. Over the past few hours, the leading cryptocurrency has started its first notable price move in literal days, tanking from $9,200 to $8,700 — a 6% move lower — in the space of only a few hours. 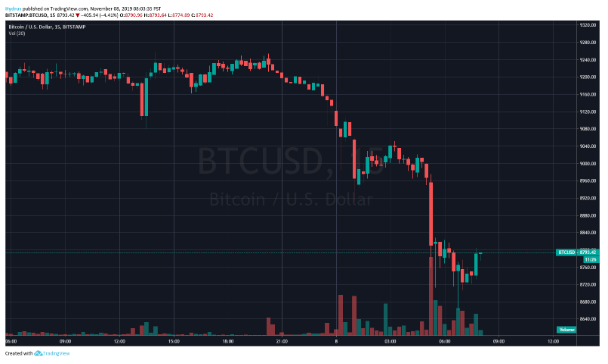 So, how are analysts responding to this latest move, which comes after two weeks of price ranging between $9,000 and $9,500?

Well, analysts aren’t too bullish, at least for a short-term time frame. Popular cryptocurrency trader DonAlt observed that a chart he posted a few weeks ago, which indicated strong support at $9,000, is still valid. His chart indicates that BTC must hold $8,400 or may fall further.

Where Will Bitcoin’s Pain Stop?

So, where will the pain stop for Bitcoin in this move?

According to a Bloomberg columnist, $8,000 is where the selling pressure should end.

Su Zhu, the chief executive of Three Arrows Capital, recently released an excerpt of a report from Bloomberg’s “monthly crypto market columnist.” And according to them, Bitcoin is looking a bit more bullish than bearish but remains stuck in a tight range.

The excerpt reads that “the worst of this year’s Bitcoin price correction… in our view.” The analyst elaborated that they expect for Bitcoin to remain bound to the $8,000 to $12,000 range until year-end; Bloomberg wrote that increasing institutional investment and a “favorable macroeconomic environment” should produce upside potential, but that “hangover selling from 2017’s price surge” should limit the upside, and potentially create some room for downside to the $8,000 region.