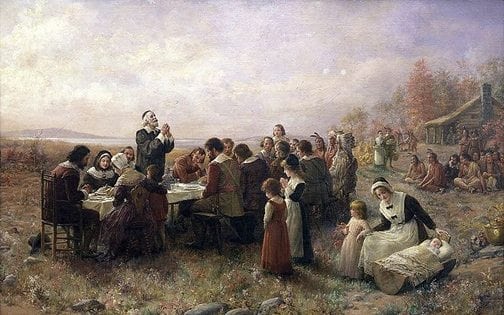 The tradition introduced by European Americans of Thanksgiving as a time to focus on God and His blessings dates back well over four centuries in America. For example, such thanksgivings occurred in 1541 at Palo Duro Canyon, Texas with Coronado and 1,500 of his men; 1 in 1564 at St. Augustine, Florida with French Huguenot (Protestant) colonists; 2 in 1598 at El Paso, Texas with Juan de Oñate and his expedition; 3 in 1607 at Cape Henry, Virginia with the landing of the Jamestown settlers; 4 in 1619 at Berkeley Plantation, Virginia; 5 (and many other such celebrations). But it is primarily from the Pilgrim’s Thanksgiving celebration of 1621 that we derive the current tradition of Thanksgiving Day.

The Pilgrims set sail for America on September 6, 1620, and for two months braved the harsh elements of a storm-tossed sea. Upon disembarking at Plymouth Rock, they held a prayer service and then hastily began building shelters; however, unprepared for such a harsh New England winter, nearly half of them died before spring. 6 Emerging from that grueling winter, the Pilgrims were surprised when an Indian named Samoset approached them and greeted them in their own language, explaining to them that he had learned English from fishermen and traders. A week later, Samoset returned with a friend named Squanto, who lived with the Pilgrims and accepted their Christian faith. Squanto taught the Pilgrims much about how to live in the New World, and he and Samoset helped forge a long-lasting peace treaty between the Pilgrims and the Wampanoag Indians. Pilgrim Governor William Bradford described Squanto as “a special instrument sent of God for [our] good . . . and never left [us] till he died.” 7

That summer, the Pilgrims, still persevering in prayer and assisted by helpful Indians, 8 reaped a bountiful harvest. 9 As Pilgrim Edward Winslow (later to become the Governor) affirmed, “God be praised, we had a good increase of Indian corn”; “by the goodness of God, we are…far from want.” 10 The grateful Pilgrims therefore declared a three-day feast in December 1621 to thank God and to celebrate with their Indian friends 11 – America’s first Thanksgiving Festival. Ninety Wampanoag Indians joined the fifty Pilgrims for three days of feasting (which included shellfish, lobsters, turkey, corn bread, berries, deer, and other foods), of play (the young Pilgrim and Wampanoag men engaged in races, wrestling matches, and athletic events), and of prayer. This celebration and its accompanying activities were the origin of the holiday that Americans now celebrate each November.

However, while the Pilgrims enjoyed times of prosperity for which they thanked God, they also suffered extreme hardships. In fact, in 1623 they experienced an extended and prolonged drought. Knowing that without a change in the weather there would be no harvest and the winter would be filled with death and starvation, Governor Bradford called the Pilgrims to a time of prayer and fasting to seek God’s direct intervention. Significantly, shortly after that time of prayer – and to the great amazement of the Indian who witnessed the scene – clouds appeared in the sky and a gentle and steady rain began to fall. As Governor Bradford explained:

It came without either wind or thunder or any violence, and by degrees in abundance, as that ye earth was thoroughly wet and soaked therewith, which did so apparently revive and quicken ye decayed corn and other fruits as was wonderful to see, and made ye Indians astonished to behold; and afterwards the Lord sent them such seasonable showers, with interchange of fair warm weather as, through His blessing, caused a fruitful and liberal harvest, to their no small comfort and rejoicing. 12

America’s first national Thanksgiving occurred in 1789 with the commencement of the federal government. According to the Congressional Record for September 25 of that year, the first act after the Framers completed the framing of the Bill of Rights was that:

Mr. [Elias] Boudinot said he could not think of letting the session pass without offering an opportunity to all the citizens of the United States of joining with one voice in returning to Almighty God their sincere thanks for the many blessings He had poured down upon them. With this view, therefore, he would move the following resolution:

Mr. Roger Sherman justified the practice of thanksgiving on any single event not only as a laudable one in itself but also as warranted by a number of precedents in Holy Writ. . . . This example he thought worthy of a Christian imitation on the present occasion. 15

That congressional resolution was delivered to President George Washington, who heartily concurred with the request and issued the first federal Thanksgiving proclamation, declaring in part:

Whereas it is the duty of all nations to acknowledge the providence of Almighty God, to obey His will, to be grateful for His benefits, and humbly to implore His protection and favor. . . . Now, therefore, I do recommend and assign Thursday, the 26th day of November [1789] . . . that we may all unite to render unto Him our sincere and humble thanks for His kind care and protection. 16

That same year, the Protestant Episcopal Church (of which President Washington was a member) announced that the first Thursday in November would become its regular day for giving thanks, “unless another day be appointed by the civil authorities.” 17 Following President Washington’s initial proclamation, national Thanksgiving Proclamations occurred only sporadically (another by President Washington in 1795, one by John Adams in 1798 and again in 1799, one by James Madison in 1814 and again in 1815, etc.); 18 most official Thanksgiving observances occurred at the state level. In fact, by 1815, the various state governments had issued at least 1,400 official prayer proclamations, almost half for times of thanksgiving and prayer and the other half for times of fasting and prayer. 19

Much of the credit for the adoption of Thanksgiving as an annual national holiday may be attributed to Mrs. Sarah Josepha Hale, the editor of Godey’s Lady’s Book, a popular lady’s books containing poetry, art work, and articles by America’s leading authors. For two decades, she promoted the idea of a national Thanksgiving Day, 20 contacting president after president until Abraham Lincoln responded in 1863 by setting aside the last Thursday of that November. The Thanksgiving proclamation issued by Lincoln was remarkable not only for its strong religious content but also for its timing, for it was delivered in the midst of the darkest days of the Civil War, with the Union having lost battle after battle throughout the first three years of that conflict. Yet, despite those dark circumstances, Lincoln nevertheless called Americans to prayer with an air of positive optimism and genuine thankfulness, noting that:

The year that is drawing toward its close has been filled with the blessings of fruitful fields and healthful skies. To these bounties, which are so constantly enjoyed that we are prone to forget the Source from which they come, others have been added which are of so extraordinary a nature that they can not fail to penetrate and soften even the heart which is habitually insensible to the ever-watchful providence of Almighty God. . . . No human counsel hath devised nor hath any mortal hand worked out these great things. They are the gracious gifts of the Most High God, Who, while dealing with us in anger for our sins, hath nevertheless remembered mercy. 21

That remarkable Thanksgiving Proclamation came at a pivotal point in Lincoln’s spiritual life. Three months earlier, the Battle of Gettysburg had occurred, resulting in the loss of some 60,000 American lives. It had been while Lincoln was walking among the thousands of graves there at Gettysburg that he first committed his life to Christ. As he later explained to a clergyman:

When I left Springfield [Illinois, to assume the Presidency], I asked the people to pray for me. I was not a Christian. When I buried my son, the severest trial of my life, I was not a Christian. But when I went to Gettysburg and saw the graves of thousands of our soldiers, I then and there consecrated myself to Christ. 22

The dramatic spiritual impact resulting from that experience was not only visible in Lincoln’s Thanksgiving Day proclamation (and also his 1864 call for a day of prayer and fasting) but especially in his 1865 Second Inaugural Address.

As you celebrate Thanksgiving this year, remember to retain the original gratefulness to God that has always been the spirit of this – the oldest of all American holidays. (Below are representative examples of the scores of Thanksgiving proclamations penned by various Founding Fathers.)

[Congress] recommended [a day of] . . . thanksgiving and praise [so] that . . . the good people may express the grateful feelings of their hearts and . . . join . . . their humble and earnest supplication that it may please God, through the merits of Jesus Christ, mercifully to forgive [our sins] and . . . [to] enlarge [His] kingdom which consisteth in righteousness, peace and joy in the Holy Ghost. 24 Continental Congress, 1777 – written by SIGNERS OF THE DECLARATION SAMUEL ADAMS AND RICHARD HENRY LEE

[I] appoint . . . a day of public Thanksgiving to Almighty God . . . to [ask] Him that He would . . . pour out His Holy Spirit on all ministers of the Gospel; that He would . . . spread the light of Christian knowledge through the remotest corners of the earth; . . . and that He would establish these United States upon the basis of religion and virtue. 25 GOVERNOR THOMAS JEFFERSON, 1779

[I] appoint . . . a day of public thanksgiving and praise . . . to render to God the tribute of praise for His unmerited goodness towards us . . . [by giving to] us . . . the Holy Scriptures which are able to enlighten and make us wise to eternal salvation. And [to] present our supplications…that He would forgive our manifold sins and . . . cause the benign religion of our Lord and Savior Jesus Christ to be known, understood, and practiced among all the inhabitants of the earth. 26 GOVERNOR JOHN HANCOCK, 1790

26. John Hancock, Proclamation for a Day of Public Thanksgiving (Boston, 1790), from an original broadside in possession of the author.