Yesterday, it was revealed that the chief executive of Ripple Labs, Brad Garlinghouse, made a massive announcement during an event surrounding the World Economic Forum of 2020 in Davos, Switzerland.

At the Wall Street Journal event, Garlinghouse said that he believes in the next 12 months, âyou’ll see initial public offerings in the crypto/blockchain space.â 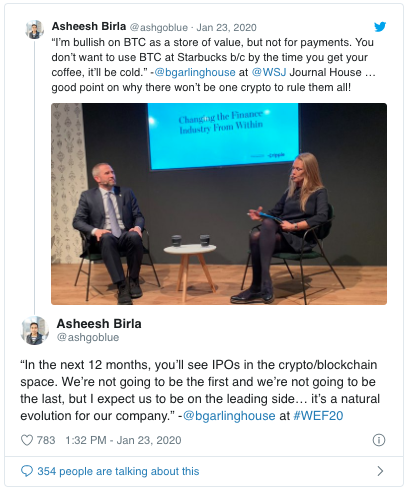 In other words, Garlinghouse thinks it is a ânatural evolutionâ for his company to issue shares on public stock exchanges.

Of course, this comment quickly elicited a massive response from the crypto community. Some were positive, some were negative, and some were neutral.

One of the most notable responses to this news was one from Bully, a cryptocurrency commentator who works as a lawyer. The pseudonymous commentator posted the below tweet, seemingly throwing shade at Ripple’s intent to issue shares on public exchanges, further adding to his point by publishing an image from South Park that says: 1) start up, 2) cash in, 3) sell out, and 4) bro down. 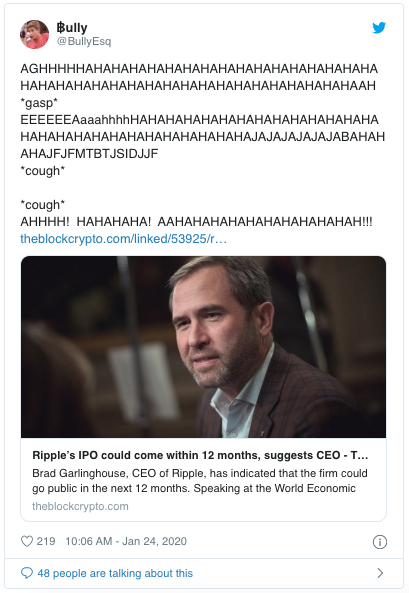 More seriously, prominent XRP and Ripple commentator GreenEggsnHam, who sports over 16,000 followers on Twitter, wrote that this news is disappointing to hear to him. The commentator specifically looked to the fact that Ripple has âhalf a billion dollars in cash and billions more in XRP escrow,â which would suggest that there is no need for the company to raise funds on public markets. They continued:

This is nothing but a wealth transfer mechanism and I find it utterly disgusting. There is zero reason for Ripple to become a publicly traded company â they don’t need the funds. I expected more from these guys. 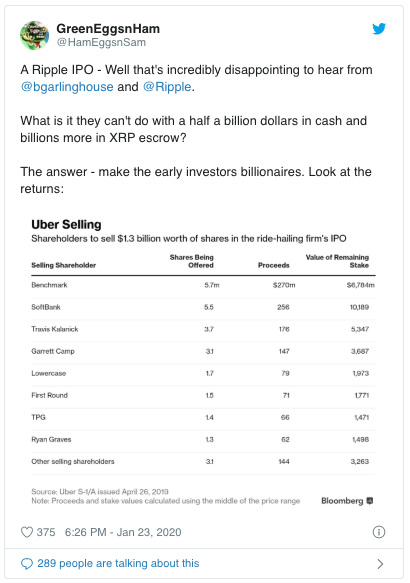 This comment garnered hundreds of likes from others in the cryptocurrency community.

On the other side of things, XRP bull and eerily accurate cryptocurrency trader Credible Crypto shared an article from popular Ripple community member Hodor, in which he laid out the potential effects a public listing of shares of the fintech company could have on Ripple itself:

Hodor suggested that if his calculations of a large multi-billion-dollar IPO is correct, the company could bag big business deals, enlist powerful marketing campaigns, and acquire many companies to help push the adoption of its technology.

This potential demand might not be hearsay. Per previous reports from Ethereum World News, the company was late last year valued at $10 billion in the venture capital markets in a $200 million Series C funding round. This made it more valuable than WeWork.