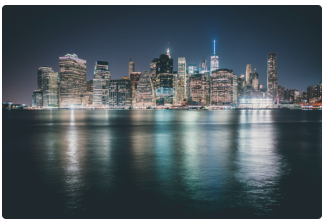 Bitcoin (BTC) may have lost its bullish momentum over the past few days, but institutions are purportedly still well on their way back to the crypto space.

Ever since 2017, crypto investors across the board have been eyeing institutions, trying to determine if giants in finance, technology, and retail were going to make a play in this embryonic industry. At first, Wall Street was all for Bitcoin: the CME and CBOE launched futures for the leading digital asset, Goldman Sachs hinted at its interest to launch a crypto asset trading desk, ETF giant BlackRock purportedly had a “task force” for digital assets, and a number of over-the-counter desks were propped up.

But, once BTC started to fall, institutions fell silent. Executives in finance stopped mentioning “cryptocurrency” or related buzzword, and some firms, like Goldman, dropped plans to make any ventures in the space. However, over the last couple of months, institutions have begun to express interest and Bitcoin and its ilk once again, likely recognizing that cryptocurrencies aren’t dead after all.

The New York Stock Exchange/Intercontinental Exchange launched Bakkt, a Bitcoin futures exchange and infrastructure play; Fidelity Investments launched its own crypto custody & trade execution service, all while continuing to mine BTC in-house; Nasdaq has claimed that it is working on cryptocurrency futures; and TD Ameritrade and E*Trade, two retail brokerage giants situated in the United States, are reported to have plans to launch spot Bitcoin trading to millions of investors shortly.

But, according to a recent report from the Financial Times, which, like many other mainstream outlets, have ramped up their coverage of cryptocurrency, the recovery in the Bitcoin price has rekindled Wall Street’s interest in crypto more than we may realize. 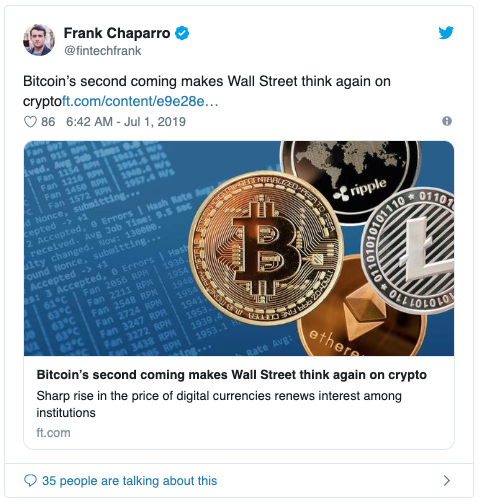 The outlet writes that “senior figures in the financial services industry” have begun to eye cryptocurrency. For instance, a Dutch exchange-traded fund firm, Flow Traders, added crypto assets. And, over 50 companies, including high-frequency trading/market making firms DRW and Jump Trading, have formed a group to “develop a ‘deep, efficient, and secure’ market”.

The Financial Times adds that there has been a resurgence in interest in the Asian market, especially Japan and China. Per David Mercer of LMAX Exchange, this shift in the market can be pinned to Bitcoin finding use as a hedge “against a deflationary monetary environment.” Indeed, Deutsche Bank analysts recently admitted that Bitcoin may find use as a way out of traditional finance, which many believe is on the edge of collapse, due to dovish fiscal policies on behalf of the world’s central banks.

Regardless of the exact reasoning institutions have for returning to the space, it seems that Wall Street and their counterparts in Asia and Europe believe that at long last, crypto is here to stay.