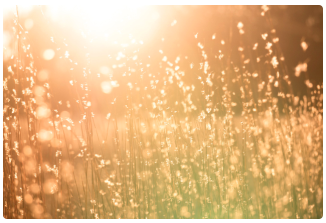 Bitcoin (BTC) has been absolutely slammed over the past five days. Since passing above $13,000 for the second time this year on Wednesday, the cryptocurrency has been on a clearly downward-sloping trend. As of the time of writing this, Bitcoin sits at $10,600 — down by around 25% from its year-to-date high of $13,900.

Despite this harrowing price action, which has resulted in a sentiment of “extreme fear” according to the Bitcoin Fear and Greed Index, Fundstrat’s Tom Lee is still quite bullish.

In a recent response to Morgan Creek’s Jason Williams, the Wall Street’s resident staunch cryptocurrency optimist, explained that it is “healthy” to see Bitcoin pullback here. 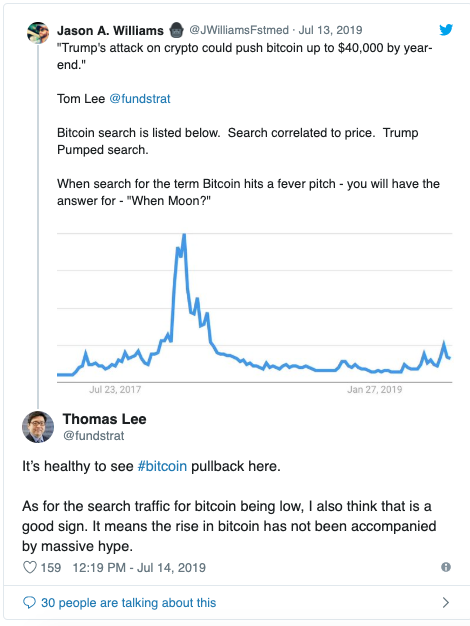 Backing his claim, Lee suggests that as Bitcoin’s search traffic, as calculated by Google Trends, is still low, the recent drawdown makes sense and could be deemed a “good sign”. You see, the fact that search interest for the “Bitcoin” and “crypto” keywords haven’t rallied to 2017 levels suggests that there isn’t “massive hype” gracing this budding market, which means that BTC has room to run and is only in the early stages of its next cycle.

And as The Crypto Monk, a popular trader, remarked in a tweet, in previous bull runs, BTC established a pattern of entering parabolic uptrends, breaking them, consolidating, before embarking on more parabolic uptrends. Barring that Bitcoin currently isn’t in a bull market, this same series of events could easily play out now. 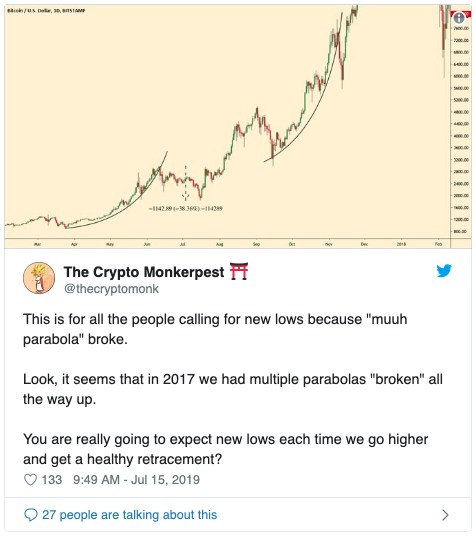 In the interview, Lee said that all things considered, Donald Trump’s tweets regarding this industry are “positive” because they cement the idea that cryptocurrencies are a relevant topic on the global geopolitical and macroeconomic stage. Indeed, over the past few weeks, the words “Bitcoin”, “Libra”, and “Crypto” have begun to grace mainstream outlets and government hearings time and time again.

Lee expounded: Trump’s comments “makes the other 99% [of the world] more aware [of cryptocurrency].” And if 1% of this new audience somehow finds value in the cryptocurrency market, the size of the community surrounding this asset class would de-facto double instantly.

In previous interviews, the Fundstrat co-founder also looked to the launch of Libra; a growth in cases of dovish fiscal policy, which some say will increase the chances of a recession and large inflationary events; and geopolitical tension that could only bolster the fundamental need for decentralized money as other bullish catalysts.