The Future Of Online Marketing and Social Networking – MARKETHIVE 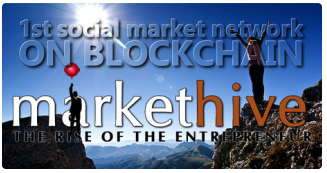 Markethive is a Market Network, a hybrid: part social network, part marketplace, part SaaS with a News and Press Release Site built in.

Just as brick and mortar businesses have been and still are falling by the wayside to make room for much bigger and better ways in which to do business online without borders, traditional social networks will need to either evolve into being much more business- and commerce-friendly or get left behind.

In today’s economic and technological cultures, what had been seen previously as traditional jobs and long-term employment are now things of the past. Statistics have shown that employees and laborers now work on average for only 4 years or less. More and more, the faces of this new paradigm shift are Entrepreneurs. Reid Hoffman founder of LinkedIn is quoted as saying, “All human beings are entrepreneurs.”

Hence, the impetus for designing a platform that will ultimately create real Universal Income that is available for everyone. Essentially that means giving every single person, skilled or unskilled, an avenue and a purpose to get up in the morning and apply themselves every day where they will achieve an income that will grow and eventually give them the autonomy and financial success whether it be through a service they provide, a business they are marketing or a passion they are pursuing. Therefore not worrying or relying upon a job market that is in the decline, but looks forward to retirement and fulfillment on every level.

It should be noted that Universal [basic] Income has become a new focus of elites, such as Elon Musk. However, this has a different meaning to what I’m talking about here. Although the reason for this topic does affect us which gives rise to the possibility where autonomy, time and financial freedom is an opportunity at hand with Markethive’s Universal Income. [and it’s far from “Basic”]

Attributes of a Successful Market Network.

If you recall from history, back in the days of the Gold Rush, it turned out to be those who provided the tools and resources for the miners who benefited the most financially.

In a Market Network, a many-to-many transaction pattern is key. A Market Network often starts by enhancing a network of professionals that exists offline. Many of them have probably been transacting with each other for years using various offline methods of doing business: phone calls, fax, checks, and overnight packages. When moving all these connections and transactions into software, the creation of a Market Network makes it much easier for professionals to operate their businesses and for clients to get far better service.

Starting NOW, there will be many more forward-thinking entrepreneurs stepping forward, with their sights set upon creating increasingly innovative, highly synchronized business models and solutions to doing business in the 21st century and beyond. Those who will be most successful will not only keep up with the speed at which technology continues to change, but they will align themselves ahead of the curve at all times.

Markethive built on the Blockchain with its own coin has made this whole system immutable, transparent, private and autonomous. This is the next generation in Social and Market Media.

Writer for the Market Network and crypto/blockchain industry.

Original article posted on the EthereumWorldNews.com site, by Adrian Mathieu.