Senators Ron Wyden, Cynthia Lummis, and Pat Toomey have proposed an amendment to a crypto provision seeking to garner $28 billion in taxes. 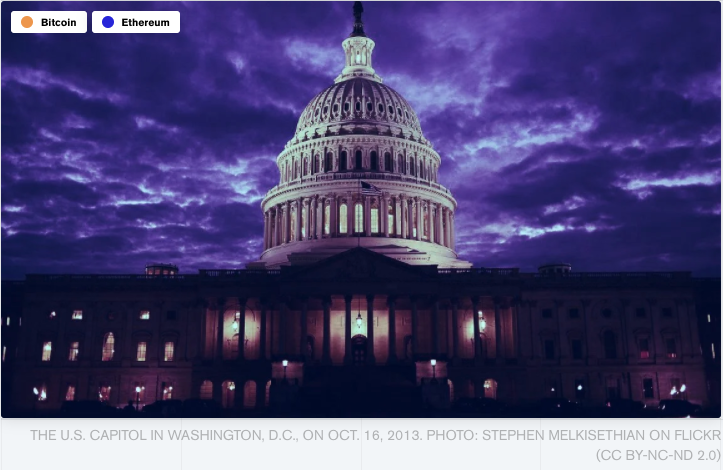 A bipartisan amendment would de-fang a cryptocurrency provision attached to a $1 trillion infrastructure bill being debated in the U.S. Senate.

Senators Ron Wyden (D-OR), Cynthia Lummis (R-MT), and Pat Toomey (R-PA) have introduced an amendment that would exempt Bitcoin miners and validators on other blockchain networks from a provision aimed at raising $28 billion in tax revenue to help pay for the bill.

The original language of the bill changed the definition of a broker for tax purposes to include “any person who (for consideration) is responsible for and regularly provides and services effectuating transfers of digital assets.”

That meant a whole range of non-custodial crypto actors, including miners and validators on proof-of-stake networks, would legally be required to file 1099 forms—which ask for customer names and addresses—with the Internal Revenue Service.

As Compound General Counsel Jake Chervinsky noted last week: “As those who understand crypto already know, users are pseudonymous & access is permissionless. It’s literally impossible for non-custodial actors like miners to get the information they need to do Form 1099s.”

He continued: “In practice, this could mean a de facto ban on mining in the USA.”

Even if impractical, it amounted to a backdoor way of gathering private data on cryptocurrency users.

The proposed amendment—which, in fact, would update a different bipartisan amendment to the provision—makes clear that’s not the provision’s intent. It specifically excludes those responsible for “validating distributed ledger transactions,” as well as wallet creators and protocol developers. 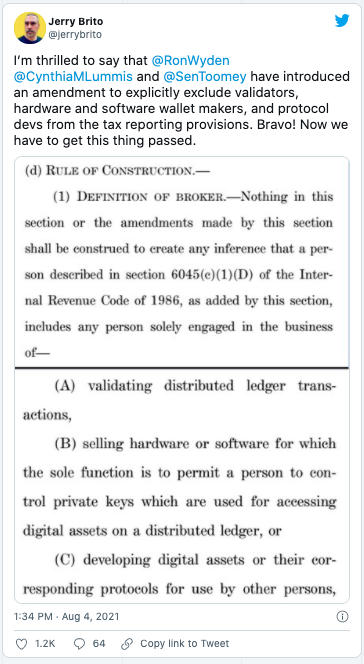 Senator Wyden is a longtime advocate of web privacy. Last year, he sponsored a bill that would prevent warrantless searches of American’s web browsing histories. Senator Lummis is a major proponent of Bitcoin and believes the currency’s deflationary properties provide an antidote to the Federal Reserve’s expansionist monetary policy. For his part, Senator Toomey in June wrote a letter to Treasury Secretary Janet Yellen asking her to re-think proposed FinCEN requirements to collect data on private cryptocurrency wallets.

The Senate will be busy debating other amendments to the infrastructure bill, which is expected to be voted on before the chamber goes into recess this weekend.

Original article posted on the Decrypt.co site, by Jeff Benson.