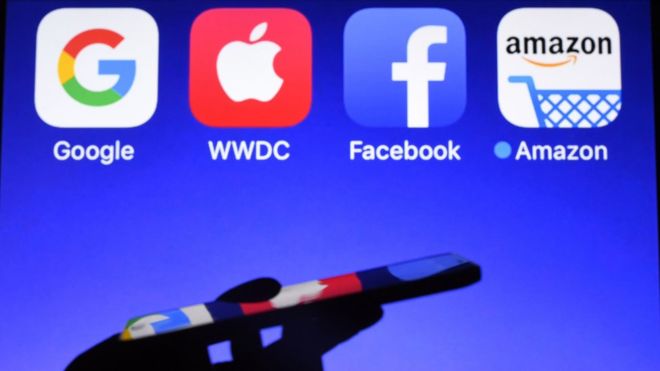 The US government is to take a fresh look at how the four tech giants Google, Facebook, Apple and Amazon wield their power.

It comes in the wake of criticism about privacy breaches, disinformation and anti-competitive practices.

It could lead to more formal investigations from the Federal Trade Commission, among others.

Shares in all four fell on the news but none has yet commented.

At a news conference, Democratic congressman David Cicilline, who is chairman of the House Judiciary's sub-committee, said it plans a number of hearings and will take testimony from executives of leading technology firms.

There could also be requests for politicians to view internal documents.

He said the investigation would not target one specific company but rather focus on the belief that "the internet is broken".

US President Donald Trump has called for closer scrutiny of Google and social media firms, accusing them of suppressing conservative voices. He has also criticised Amazon for taking advantage of the US Postal Service.

The FTC is already investigating Facebook over the Cambridge Analytica scandal with the social network bracing itself for fines of up to $5bn (£3.9bn).

Google has also been scrutinised by the FTC and was fined 1.5bn euros (£1.3bn) in March for abusing its dominant position in online search advertising.

Apple is also the subject of an EU investigation following a complaint from streaming music provider Spotify that it abuses its power over app downloads.

Article written by and posted on the bbc.com website.