After linking up with Ubisoft, the proof-of-stake blockchain network becomes the “main partner” of a major esports team. 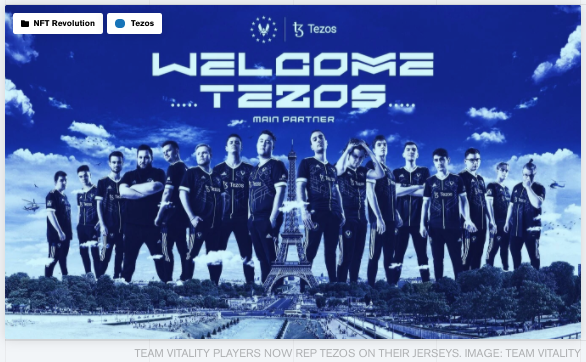 The three-year deal will run through 2024 and see Tezos become Vitality’s “main partner” amid other team sponsorships, including with apparel brand Adidas and PC hardware maker Corsair. An image shared by both parties shows a variety of Vitality players wearing a new jersey with the Tezos logo on the chest.

Beyond the jersey sponsorship, Tezos will also develop technical blockchain-based applications for the esports team, including NFT collectibles, an NFT marketplace, and fan engagement opportunities. Vitality players will also work to educate esports fans about blockchain tech, as other teams have done via their respective crypto sponsorships.

Terms of the deal were not disclosed. In a release, Vitality described the alliance as its largest sponsorship deal to date and “one of the biggest European partnerships in esports.”

Vitality’s deal with Tezos is the latest in a recent surge of partnerships between esports teams and leagues and crypto industry companies.

Cryptocurrency exchange FTX has arguably made the biggest headlines in the space so far, sponsoring popular club Team SoloMid (TSM) in a 10-year, $210 million naming rights deal in June 2021. In August, the exchange signed a seven-year deal (value not disclosed) with Riot Games to sponsor League of Legends esports competitions.

While crypto industry partnerships are flourishing in the esports industry, traditional video game publishers and developers have faced backlash for embracing NFTs. Ubisoft’s recent tie-up with Tezos for in-game NFT items in Tom Clancy’s Ghost Recon: Breakpoint was met with social media backlash, although the project still went ahead.

Original article posted on the Decrypt.co site, by Andrew Hayward.